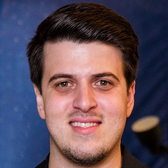 Did you notice that things haven't changed on the internet in a long time? I remember a time where al